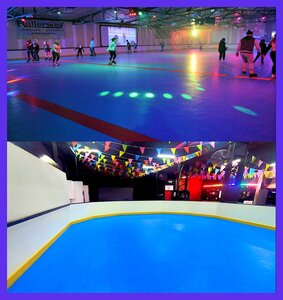 Rollerway in Newtown, Geelong, is one of Australia’s longest operating skate centres, having first opened as a roller-skating rink in 1975.  Several name changes and a few owners later, the current management arrived in 1993, and Rollerway Newtown was reborn.

It’s one of Australia’s most successful inline and roller skating rinks, used by tens of thousands of people every year, and is still a leading birthday party venue, also has a comprehensive skate & hockey shop, while boasting Australia’s premier Inline Roller Hockey Development Program for boys & girls.

In 2018, our Skate Park was replaced by the new Party, Practice & Play area, which complements and expands on the possibilities offered by the main rink and the other amenities (now with two rinks and two snack bars – more below).

Rollerway has public and private General Skating Sessions, Recreational and Competitive In-line Hockey, Skill & Fitness Development Classes, and Specialist Training Programs. When it comes to sporting activities, Rollerway has more teams playing out of the Centre than any of the State Leagues, and probably more than ALL the State Leagues combined!

Rollerway, is a Division of the Allied Group of Companies (Allied Management P/L & Allied Health & Safety P/L) a Geelong family owned and based group, with a well established trading record.

Come and see the Centre’s new Party, Practice & Play area, which has a self-contained training rink for beginners, a new snack bar, and an expanded birthday party area, with a Toddler Play Area to come along in future.

The Centre is 2-4Km from either the Geelong or South Geelong train stations.

Connecting buses from the Geelong CBD stop about 150 metres from the Centre on West Fyans Street. Contact your local bus company or transport service for more info.

Easy payment options for your convenience

To make your stay a little nicer